I am moving to WordPress…..
Check out my post here: http://thefrostedbakeshop.wordpress.com/2008/06/04/french-chocolate-brownies/ 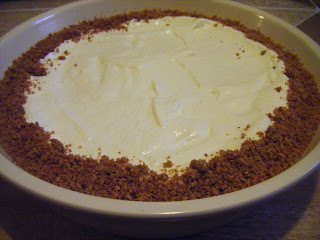 This weeks Tuesday with Dorie recipe is Florida Pie chosen by Dianne of Dianne’s Dishes.

I was looking forward to making this pie and everything was set for me to make this successfully and then i made one little change which threw everything off.
At the last minute i decided to change the pie plate i was using…..and didn’t realize the one i chose was way bigger and deeper. (so my layers are very squat)
Once i made the crust and pressed it into the pie dish it looked like it wasn’t enough so i doubled the recipes (now i have too much crust)
After two failed attempts at the meringue topping i decided to just use a tub of cool whip (the layer is very thin - i should have used two tubs)
Even after adding the cool whip to the top there was still so much crust since the pie dish is deep so i just took a fork and scraped it down onto the sides.
I wish i had some more limes to put some sort of decoration in the middle.
Visit the Tuesdays With Dorie blogroll to see other Florida Pies!
Click here for printable version of the recipe.
Next week: Traditional Madelines
Last Week: Peanut Butter Torte