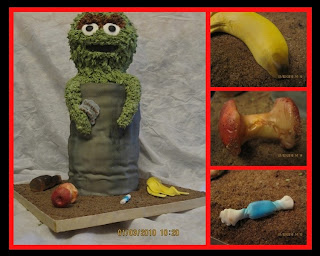 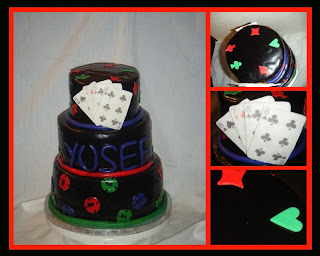 I made this cake for a 23rd birthday. I designed it at least three weeks ago. I knew all the componets that i had to pre-make. But some things came up and i couldnt get to do them, so i pulled an all nighter to make the decorations. The only thing i didnt get to make was the topper – it was going to be two large dice – totaling 23.

I tried a new technique – which is to use ganache for the out covering instead of buttercream. It was so easy to do and made my fondanting so much easier. I will definitely this technique going forward.

Suprisingly it came out better than i anticipated but then it started MELTING!
It was so hot in my apartment that the fondant actually became sticky and as time went on, and the heat & humidity rose, the fondant actually started to melt. For the most part you cant really tell, it just gave the cake a super glossy look but upon further inspection you will see that some of the decorations started to slide down the bottom

This is actually the second time this has happended to me within a month, so i guess it is time to invest in a really good ac!

I will be making this cake for a birthday party this coming Friday. Will post pics and results then!

This months cake was a Pina Colada Cake. I absolutely loved this cake. A brown sugar cake with pineapple filling and coconut buttercream! I halved the recipe since and needless to say i was gone before i could take a picture of it:-(

Here’s a printable link to the recipe. Visit the The Cake Slice Bakers to check out all of our mile-high cakes this month.

The April 2009 challenge is hosted by Jenny from Jenny Bakes. She has chosen Abbey’s Infamous Cheesecake as the challenge.

I love cheesecake and haven made any in a while so i was excited to make this months challenge. I decided to make mini cheesecakes and then i got an idea to split up the recipe and make assorted flavors

And then i put them in the oven. THAT OVEN! I totally forgot that my oven is usually 25-50 degrees higher than what is on the dial. UGH. When i went to check on them they puffed up like helium balloons – so i knew it was downhill from there. 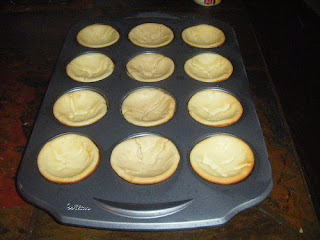 Im just going to put a dollop of whipped cream on top of each to hide the imperfection :). Anyhow the batter was super creamy and tasty so im sure others had much better luck than I did.

2. Mix together the crust ingredients and press into your preferred pan. You can press the crust just into the bottom, or up the sides of the pan too – baker’s choice. Set crust aside.

3. Combine cream cheese and sugar in the bowl of a stand-mixer (or in a large bowl if using a hand-mixer) and cream together until smooth. Add eggs, one at a time, fully incorporating each before adding the next. Make sure to scrape down the bowl in between each egg. Add heavy cream, vanilla, lemon juice, and alcohol and blend until smooth and creamy.

4. Pour batter into prepared crust and tap the pan on the counter a few times to bring all air bubbles to the surface. Place pan into a larger pan and pour boiling water into the larger pan until halfway up the side of the cheesecake pan. If cheesecake pan is not airtight, cover bottom securely with foil before adding water.

5. Bake 45 to 55 minutes, until it is almost done – this can be hard to judge, but you’re looking for the cake to hold together, but still have a lot of jiggle to it in the center. You don’t want it to be completely firm at this stage. Close the oven door, turn the heat off, and let rest in the cooling oven for one hour. This lets the cake finish cooking and cool down gently enough so that it won’t crack on the top. After one hour, remove cheesecake from oven and lift carefully out of water bath. Let it finish cooling on the counter, and then cover and put in the fridge to chill. Once fully chilled, it is ready to serve.

Pan note: The creator of this recipe used to use a springform pan, but no matter how well she wrapped the thing in tin foil, water would always seep in and make the crust soggy. Now she uses one of those 1-use foil “casserole” shaped pans from the grocery store. They’re 8 or 9 inches wide and really deep, and best of all, water-tight. When it comes time to serve, just cut the foil away.

Prep notes: While the actual making of this cheesecake is a minimal time commitment, it does need to bake for almost an hour, cool in the oven for an hour, and chill overnight before it is served. Please plan accordingly!

Some variations from the recipe creator:

** Lavender-scented cheesecake w/ blueberries – heat the cup of heavy cream in the microwave or a saucepan until hot but not boiling. Add 2 tbsp of lavender flowers and stir. Let lavender steep in the cream for about 10-15 minutes, then strain the flowers out. Add strained cream to cheesecake batter as normal. Top with fresh blueberries, or make a quick stovetop blueberry sauce (splash of orange juice, blueberries, a little bit of sugar, and a dash of cinnamon – cook until berries burst, then cool)

** Cafe au lait cheesecake with caramel – take 1/4 cup of the heavy cream and heat it in the microwave for a short amount of time until very hot. Add 1-2 tbsp. instant espresso or instant coffee; stir to dissolve. Add this to the remainder of cream and use as normal. Top cheesecake with homemade caramel sauce (I usually find one on the food network website – just make sure it has heavy cream in it. You can use store-bought in a pinch, but the flavor is just not the same since its usually just sugar and corn syrup with no dairy).

** Tropical – add about a half cup of chopped macadamias to the crust, then top the cake with a mango-raspberry-mandarin orange puree.

** Mexican Turtle – add a bar of melted dark chocolate (between 3 and 5 oz., to taste) to the batter, along with a teaspoon of cinnamon and a dash of cayenne pepper (about 1/8 tsp.). Top it with pecan halves and a homemade caramel sauce.

** Honey-cinnamon with port-pomegranate poached pears – replace 1/2 cup of the sugar with 1/2 cup of honey, add about a teaspoon or more (to taste) of cinnamon. Take 2 pears (any variety you like or whatever is in season), peeled and cored, and poach them in a boiling poaching liquid of port wine, pomegranate juice/seeds, a couple of “coins” of fresh ginger, a cinnamon stick, and about a 1/4 cup of sugar. Poach them until tender, then let cool. Strain the poaching liquid and simmer until reduced to a syrupy-glaze consistency, then cool. Thinly slice the cooled pears and fan them out atop the cooled cheesecake. Pour the cooled poaching syrup over the pears, then sprinkle the top with chopped walnuts and fresh pomegranate seeds.

Some variations from Jenny (from JennyBakes):

**Cheesecakelets – put in muffin tins, ramekins, or custard cups. Try baking 20-35 minutes, or until still a little jiggly, and cool as before.

So I have been wanting to make some posts to my blog, but besides my pc not working, I HATED MY BLOG DESIGN!

Then yesterday i remembered Delicious Design Studios , checked their site and saw this cute template in my favorite colors and bought it immediately! Within the hour Jess contacted me and viola my new blog was born.


I am actually going to be changing the focus of my blog. It will no longer be a mish-mosh of anything i make. My blog will be tied into my soon to launched webiste and it wil be mainly about cakes which have been made for clients and events -with an occasional blogging event thrown in:)

but for now i have some long overdue posting to do!

My new blog is located at
http://thefrostedbakeshop.wordpress.com/