Navigation
I am officially a Daring Baker!!!

:). For the past few months I have seen Daring Baker entries and thought, wow that group sounds cool, I should join. But I always found some reason not to. Well one of my New Years resolutions is to cook more, so last month I finally sent the email to join. I eagerly awaited instructions for my first challenge, checking my email several times a day. And then finally I got it. Yes!!!
This month’s challenge was French Bread by Julia Child chosen by Breadchick Mary (The Sour Dough) and Sara (I Like to Cook). I have never made bread before so this was definitely a challenge in more ways than one. Thn I printed the recipe & instructions, and my nitial thought was WHOA! The recipe was really simple (only four ingredients) but the amount of the instructions was overwhelming (I think that is why I waited until the Wednesday to make my bread).
Once I started the process I realized that it is really not complicated, just time consuming. It took me about 10.5-11 hours to make this bread (including cooling time). I tried to follow the directions 100% but I really think I kneaded the dough too much as my loaves didnt really rise during the 3rd proof and were a little flat. I had some trouble with the cuts on the top of the bread, the razor was not slicing thru, so I tried my chef’s knife. It worked a little better but I still didn’t get the effect I wanted. Once the timer went off and I went to remove the bread I thought it was a little pale, but once I removed it from the oven the color started to set it (phew!)
Even though you are not supposed to, I just couldn’t resist eating a couple of slices right out of the oven. I love warm bread with butter and this was really good. My intentions were to keep one loaf, give one to my mom and the other to my aunt, but i wound up eating two loaves (yes they are finished) and giving the other to my mom. 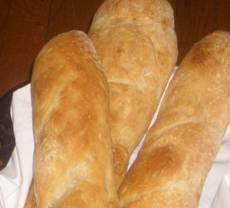 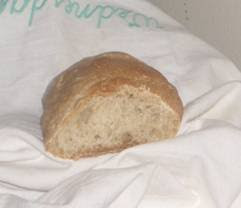 All in all I am happy that I joined as this was a great experience, a great recipe which produced some wonderful bread – but I don’t think that I would make this again due to the amount of time it takes.
For recipe click here
Be sure to check out the Daring Bakers Blogroll to see more bread!

This is the first Tuesday I spent with Dorie, and I can’t wait to see her again next week!!!

I’ve had “Baking” for some time and bookmarked recipes but never tried them. So when I found Tuesdays with Dorie I figured this group was perfect. This weeks recipe is Pecan Sour Cream Biscutis chosen by Ashley of Eat Me Delicious. I’m a biscuit lover but was not so sure how nuts would do inside a biscuit. But then i thought about using “nut-butters” on regular biscuits – so i figured this should be interesting.

The biscuits were really simple to make. The batter was delicious. The biscuits baked up with a nice crust and tender inside. The inside was not as fluffy as I would like but I think I kneaded the dough to much, plus I also rolled them too thin. I ate them with sweet butter & maple syrup. 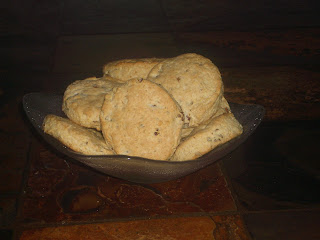 This month’s Weekend Cookbook Challenge is hosted by Foodiechickie and the theme is – Nigella Lawson . I admit I am a fan of Nigella’s show, I’ve never heard anyone describe food the way she does, but I only have one of her cookbooks and have never tried any of her recipes. I wanted to try something simple, so I chose the RoseBud Madelienes from her cookbook How To Be A Domestic Goddess.


The recipe says that this should make 48 mini Madeleines, but since I only have a full size pan I decided to use that. I am not sure how small mini Madeleines are, but I have to say I was quite shocked when the batter made just about one cup. I filled each cavity with one tablespoon of batter – which gave me 10 full sized Madeleines. The recipe states to cook for 5 minutes but start checking after 3 minutes, but since these are full sized they took a little longer – about 11 minutes in my oven.

The texture of the cookie was quite nice and was really light – but i wasnt too crazy about the taste, I felt it was missing something. I would make these again in the spring – doubling the recipe of course. But I don’t think I would use the rosewater flavor, I would either use vanilla or maybe some lemon zest.

ROSEBUD MADELEINES ( from How to Be a Domestic Goddess: Baking and the Art of Comfort Cooking by Nigella Lawson)

DIRECTIONS
-Melt all the butter over a low heat, then leave to cool.
-Beat the egg, caster sugar and salt in a bowl for about 5 minutes, preferably with an electric mixer of some sort, until it’s as thick as mayonnaise.
-Then sprinkle in the flour; I hold a sieve above the egg and sugar mixture, put the flour in and shake it through.
-Fold in the flour with a wooden spoon and then set aside a scant tablespoon of the cold, melted butter for greasing the tins and fold in the rest along with the rosewater.
-Mix well, but not too vigorously. Leave to rest in the fridge for 1 hour, then take out and leave at room temperature for half an hour.
-Preheat the oven to 425ºF (220ºC)
-Generously brush the insides of the Madeleine tins with the tablespoon of butter (melting more if you feel you need it) before filling them with half the cake mixture (this amount does 2 batches).
-About 1 teaspoonful in each should do: don’t worry about covering the molded indentations; in the heat of the oven the mixture will spread before it rises.
-Bake for 5 minutes, though check after 3.
-Turn out and let cool on a rack, then arrange on a plate and dust with icing sugar.
-Repeat with the remaining half of the mixture.
Makes 48 mini or about 10 full sized.

Around two months ago I stumbled across the blog Tartelette and I have been addicted ever since. I haven’t been hooked on a blog like this since I found Cupcake Bakeshop. One of the entries was for an event she was hosting titled “Time to Make the Doughnuts”. Since I have really wanted to start participating in food blogging events (and hopefully start to host my own), I thought this would be the perfect one to get my feet wet. Unfortunately with all that went on this week I missed the deadline (huh???) but I decided to make them anyway since they had been on my mind. I made two versions, one covered in cinnamon sugar and one in powdered sugar. Here’s how they turned out……… 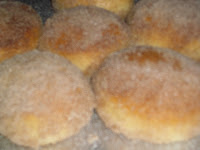 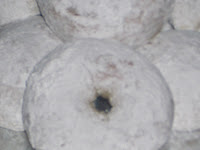 I used the ever so popular Baked Doughnuts recipe from 101 CookBooks. I have never made doughnuts, or anything with using yeast for that matter, so I was slightly hesitant but these doughnuts were really simple to make. The dough itself was yummy and the doughnuts were delicious. This recipe is definitely a keeper.

Since i completed my Wilton cake decorating courses last year i have not made any cakes.  I’ve baked but not decorated.  One of my resolutions for the new year is that i decorate at least one cake a month.  So since its February, what better theme to use than Valentines Day.
The cake is two tiered.  The bottom tier is a 8″ red velvet cake with vanilla smbc, the top tier is a 6″ chocolate cake with chocolate smbc.  Both covered in pink satin ice and embellished with Wilton sugar decorations. 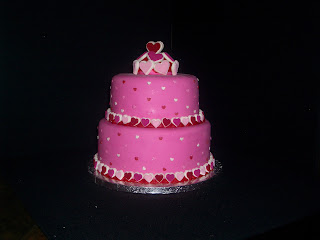 I also made some cupcakes with the leftover chocolate batter.  I topped them with vanilla frosting and a candy heart. 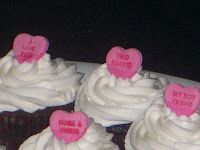